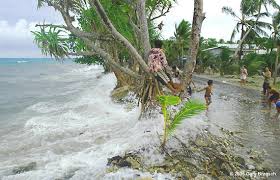 Imagine that there’s no beach in the future, there’s no island where you can enjoy the calmness and serenity that prevails. Well, this is actually happening with some island nations around the world. The rising sea level has increased so much that some islands are predicted to disappear in the next 30 years. Shocking it is! Climate change is affecting all nations regardless of their location or size of the economy but some island nations are more at risk than any other country. Being more vulnerable than other countries, these island nations are pretty much at risk in everything that concerns climate change.

These island nations are part of the SIDS (Small Island Developing States). According to the United Nations Department of Economic and Social Affairs, 52 territories share the fragility of a subsistence economy that is purely based on tourism, the marine life and agriculture by now some 14 islands are at risk by climate change. The global sea level is rising and the world’s land ice is disappearing. Over the 100 years, the sea levels have risen to 6 to 8 inches and Antarctica has been losing more than 100 cubic kilometers of ice per year since 2002, according to the NASA satellite data. In 2016, the sea rose to 3.4 millimeters per year and it is expected to rise even more quickly by the end of the century.

Contributing to less than 1 percent of the world’s greenhouse gas emissions, these countries are the first victims of climate change. Some of these islands have experienced the worst and most devastating impacts of climate change with greater risk to their economies, livelihood, and food security. With the strongest hurricanes, typhoons, and cyclones occurring at unexpected times, these island nations are constantly on the radar to prepare for the worst. Islands like Maldives, Seychelles, Vanuatu, Kiribati, and others are more at risk than other island members in the SIDS. Kiribati’s sea level has risen at a rate of 1.2 centimeters a year, making this island the most likely country to disappear due to rising sea levels in the future. The Alliance of Small Island States was established in 1990 to deal with the effects of rising sea levels, as of today it consists of 19 countries from the Atlantic Ocean, 16 countries in the Pacific Ocean, four Indian Ocean countries, and five observers.

It is not only the sea level that is causing damage to these island nations, but the warming seas have also shifted the fish stock back to where cold waters and the coral bleaching have killed essential marine habitats as well as putting at risk ecotourism industries. As of today, the AOSIS is actively engaged in preserving and protecting their island nations from the rising sea levels and other climatic change.

It is not over yet, there is a huge work ahead for preserving these beautiful islands.