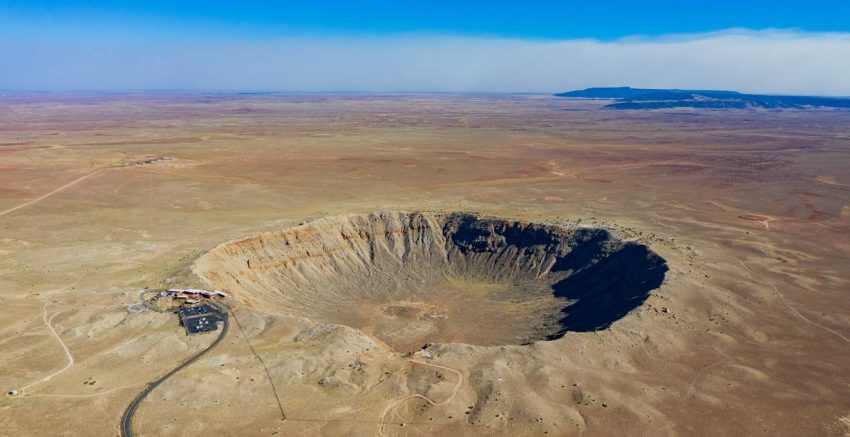 Earth is perpetually bombarded with debris from outer space. Luckily for us, most of it burns up during entry through our atmosphere and we enjoy this bright burn in the night sky in the form of fleeting meteor showers.

But on occasion, an object is so big it survives its entry through the atmosphere and it leaves its mark on the planet, literally. According to the Lunar and Planetary Institute, impact craters are formed when a planet’s surface is struck by a meteoroid, leading to the excavation of the surface material. These impact structures are characteristically roughly circular, excavated holes.

Due to Earth’s dynamic climate, processes such as weathering and erosion work to erase any trace of these cosmic visitors from our landscape. Some of the largest impacts ever to occur on Earth are barely visible to us today (at least not in the traditional ‘hole in the ground’ sense.)

In South Africa, the Vredefort Crater, also known as the Vredefort Dome is the world’s largest known impact crater, according to NASA Earth Observatory. Scientists believe the impact forged a crater between 111 and 186 miles (180 and 300 kilometers) wide, but as the crater has endured over 2 billion years of erosion, its exact size is difficult to determine.

Impact craters are our window into Earth’s geological past. Scientists study these structures to understand the history of our dynamic solar system and use this information to predict future impact scenarios.

Barringer Crater, also known as Meteor Crater, formed relatively recently (geologically speaking) just 50,000 years ago when a large iron meteor measuring 98-feet (30-meter) to 164-feet (50-meter) in diameter, crashed into the Colorado Plateau in northern Arizona, according to the Lunar and Planetary Institute. 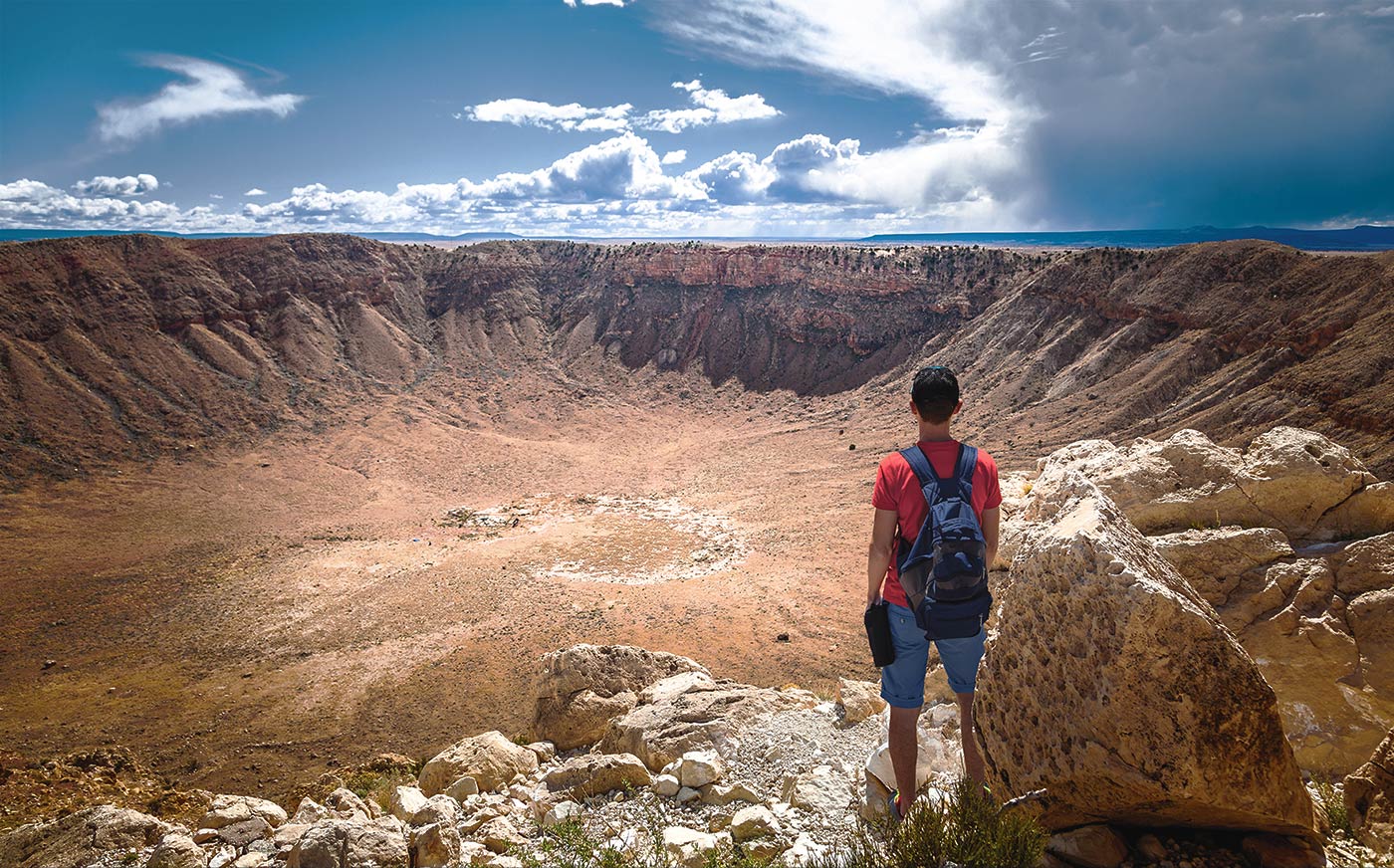 Nestled inside the Deccan Plateau in Southern India, lies Lonar Crater, a large meteorite crater that has baffled scientists since it was identified in 1823 by British officer C.J.E Alexander, according to NASA Earth Observatory.

The crater is located within a huge plain of basaltic rock left over from volcanic eruptions in the region 65 million years ago. As such, the crater was originally thought to be a volcanic crater. Nowadays it is known that the crater formed between 35,000 and 50,000 years ago as a result of a meteor impact.

Lonar Crater is the only known impact crater to have formed in basalt, according to the British Library. The unique ecosystem is a haven for local flora and fauna, the low crater hills are covered with trees and home to several species of wildlife including peafowl, chinkara and gazelles. Migratory birds can also be spotted flocking to the lake during the winter months.

The crater site is also of great cultural significance and features in Hindu mythology. Lonar Lake is considered to be the place where Lord Vishnu slayed the demon-giant Lonasura and, as part of the mythology, the crater was the demon’s lair and the lake was a result of its spilled blood.

According to the Australian Parks and Wildlife Service, Wolfe Creek Crater formed 300,000 years ago, though, a recent study from the University of Wollongong in 2019 analyzed the radiation exposure of the crater rocks and placed an estimated age on the crater of just 120,000 years, far younger than previous estimates.

A prominent feature of the landscape, Wolfe Creek is the “second-largest crater in the world from which fragments of a meteorite have been collected”. Scientists estimate that the crater’s meteor, which was 50 ft (15 meters) in diameter and weighed over 15,000 tons, was probably traveling at eye-watering speeds of 10 miles (17 km) per second before slamming into the Australian desert.

The Pingualuit National Park is situated in the heart of the Ungava plateau and is home to the impressive Pingualuit crater. Under the arctic sky, the crater is filled with pristine rainwater, cut off from inflows from other lakes. This unique environment — 876 feet (267 meters) deep — provides scientists with a window into the geological past. According to NASA Earth Observatory, sediments of Pinguluit lake were untouched during the Pleistocene Ice Age — a time period that began about 2.6 million years ago and lasted until about 11,700 years ago. While other sediments in surrounding water bodies do not extend further back than the last ice age, those found in the Pinguluit crater have preserved a much longer record.

Why visit one crater when you can visit nine? Located on Saaremaa, Estonia’s largest island, the Kaali crater field lies 11 miles (18 km) from the island capital which consists of one large crater and eight smaller craters.

Remarkably, the island is thought to have already been inhabited at the time of the meteorite impact approximately 1530-1549 BCE according to a study published in Meteoritics and Planetary Science, though the age is still a matter of debate and estimates range from 2,420 years to 8,400 years old. Despite the impact occurring during a time of possible human habitation, according to scientists involved in the study, there is no evidence that the encounter significantly affected the human population in Saaremaa.

Remarkably, the Ries crater contains a town within its inner ring, a town known as Nördlingen, according to the Planetary Science Institute. The full impact of the crater can only be seen when viewed from the air. Whilst its inner ring is highlighted by the town walls, the rest of the crater has been eroded away and is not immediately visible.

According to NASA Earth Observatory, the crater’s existence probably eluded medieval Europeans who unknowingly matched their town walls to the inner crater ring approximately 0.6 miles (1 kilometer) in diameter — likely the same dimensions as the crater-forming meteorite. 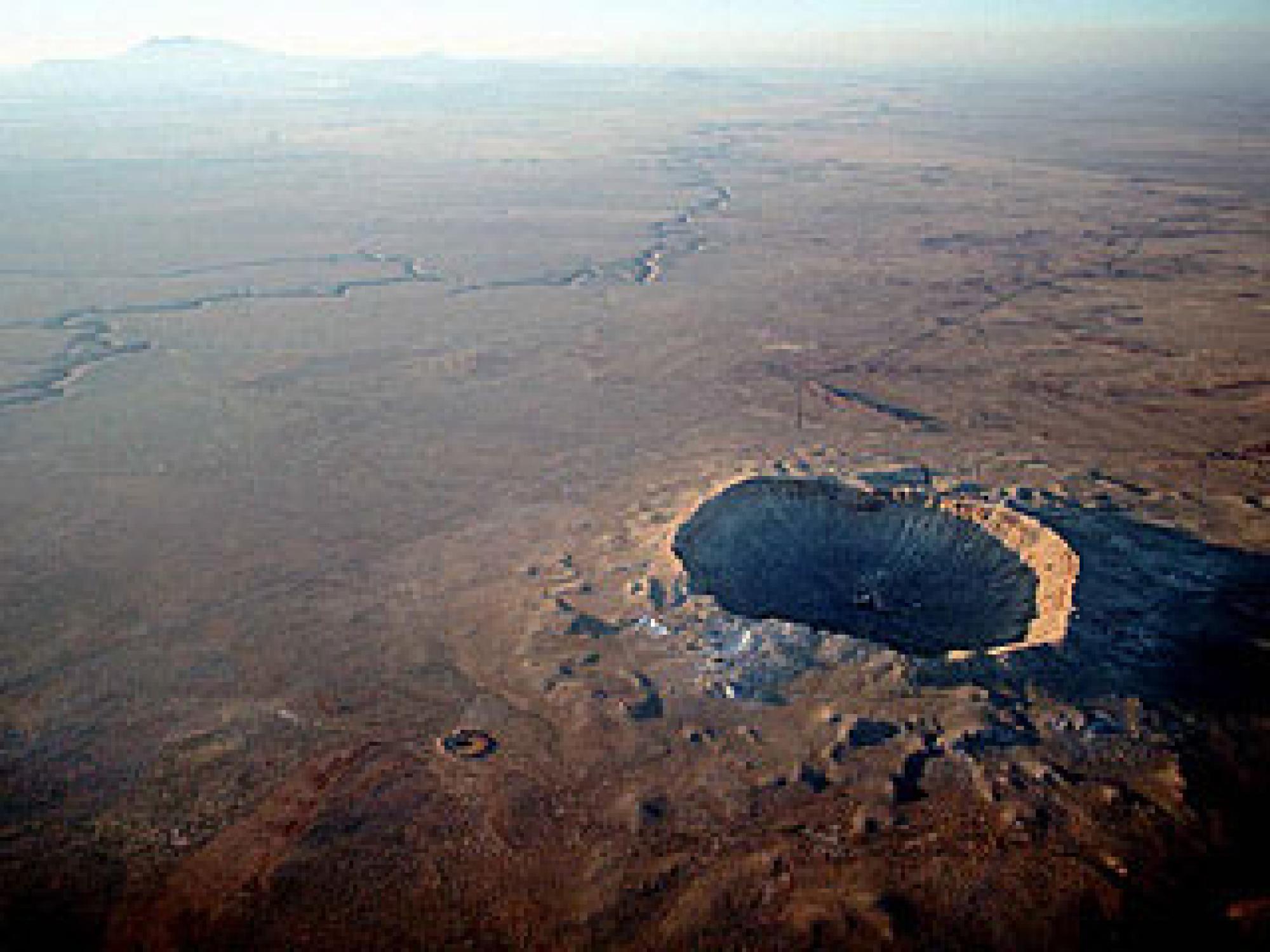 Approximately 25 miles (40 km) northwest of Pretoria, within the area of the City of Tshwane, is the Tswaing meteorite crater — originally known as Pretoria Saltpan (or Zoutpan), according to the City of Tshwane government site(opens in new tab). Tswaing is one of the best-preserved craters in the world and sediment deposits from the crater floor contain 220,000 years of climate records.

Visitors to the site can enjoy a 4.4 mile (7.2km) Tswaing Crater Trail as well as a museum display and enjoy the diverse wildlife that resides in the conservation area according to the City of Tshwane government site.

Deep in the Sahara Desert is a near-perfect circular crater called Tenoumer. According to NASA Earth Observatory, the origins of the crater had long been debated amongst geologists, with some arguing that it was the remnants of a volcano, it is not agreed that Tenoumer is indeed an impact crater.

Tenoumer is one of the trickiest crater sites to visit due to its remote location. From the Mauritanian capital Nouakchott it’s an 11-hour drive to the nearest town of Zouérat, which is about 124 miles (200 km) away.

Amid the rusty-red dunes of the Namib Desert in southwest Namibia is a crater that looks like it’d be right at home on Mars. According to ESA, the Roter Kamm crater(opens in new tab) is found in the Tsau ǁKhaeb National Park (also known as the Sperrgebiet), a mining area in southwest Namibia. Scientists believe that the meteorite that formed this crater five million years ago was the size of a large vehicle when it collided with Earth, according to ESA.

The impact gave rise to a crater rim 131 to 295 feet (40 to 90 meters) above the surrounding plains whilst the crater floor is blanketed in sand deposits at least 330 feet (100 meters) thick.