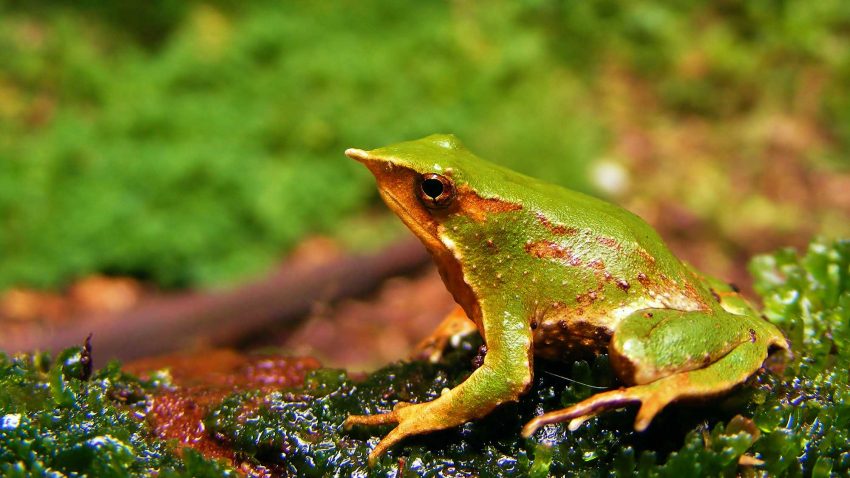 In the city, most of the time, we often do not realize that there is a huge number of animals of all kinds that exist everywhere. But without a doubt, among the multiplicity of species, there are some that are certainly the strangest. Among these, we find the rarest amphibians on our planet. And today, that’s exactly what we are going to uncover. Ready to learn more? Keep reading.

This amphibian has an enviable camouflage system, since it can easily lose sight of itself in the vegetation, a crucial factor when it comes to escaping predators, which are themselves quite numerous, given that this frog has small proportions. One of the best known species is the Darwin’s frog from Chile, but since the 1970s it seems to have disappeared.

Its habitat is forests with high humidity, as well as rivers and streams. It has the ability to swim, thanks to the webbed shape of its legs, which are short. Its diet is entirely carnivorous: it loves spiders, flies, millipedes, large ants and various insects that cross its path.

This amphibian lives in the wooded valleys that border Table Mountain, a very magical place in nature where streams flow with crystal clear and abundant water, in Cape Town, South Africa.

Its appearance is truly exotic. It has a robust oval shape with a pig-like snout. Its legs are obviously thick and very short. The size of its body is large and emphasizes that its head, compared to it, is small.

According to the data of the environmental authorities, the purple frog is the only remaining species of various amphibians that went through the evolutionary process more than 135 million years ago.

Its habitat is in burrows nearly 4 meters deep in the mountain ranges of India. Its favorite food is termites, which explains the particularity of its snout. It has a phenomenal sense of smell and when it detects a group of termites, it sucks them up with its grooved tongue which it unrolls and spreads over its prey at great speed.

Most of the time they stay underground in these burrows. Older frogs come to the surface only a few times a year, for the sole purpose of breeding.

This specimen is a rarity in the world of amphibians. It is native to the American lands and has a respiratory system like no other, which works through the animal’s skin and mouth mucosa. Unfortunately, it is a species threatened with extinction if serious measures are not taken to save it, according to scientists.

It has been classified as the “world’s largest amphibian”. But it is not only the largest, it is also one of the most phenomenal. With everything and a tail, it is so long that it can usually measure 1.9 meters. Its habitat is entirely aquatic and it knows how to adapt to many environmental conditions.

Its way of breathing is also very interesting: by means of gills, it absorbs oxygen which it conducts through the pores of its skin. It lives in water sources in high mountains. It feeds mainly on fish, insects and even other amphibians, because it is very large compared to the others.

It is almost rare to see this species, because it is seriously threatened with extinction, due to contamination from mining, logging, fracking, etc. In addition, it is a victim of commercial hunting, as it is highly sought after as food and also to prepare medicines.

It is not only classified among the strangest amphibians on the planet, but also one of the rarest animals of all. Its skin is transparent and it is a creature that remains blind throughout its existence.

It lives underground and is so strong that it can go more than a decade without needing to eat anything. But when he wants to eat, it’s something he knows how to do professionally. He easily catches his prey, thanks to his super power of electrosensitivity and a heightened sense of smell.

Have you ever seen a rare amphibian? Which one would you like to see one day? Let us know in the comments below.