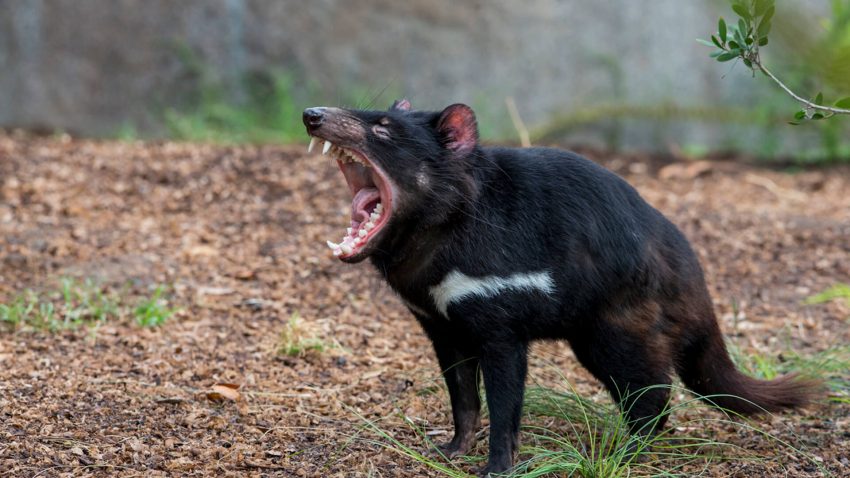 The Tasmanian devil is one of the undisputed symbols of Australia along with the kangaroo, koala and emu. This animal originally inhabited the entire country, but its species is now confined to the island of Tasmania, along the southern coast of Australia.

Although its name immediately makes us think of the very famous Taz from the Looney Tunes, the Tasmanian devil is in fact a very cute, but also one of the most dangerous marsupial on the planet. Not so much for humans as for its prey. Although he doesn’t behave like a real devil, this little guy will surprise you a lot with his weird habits.

Here are 10 things about this species that you might not imagine:

The reason why this animal is called the Tasmanian devil lies in this very characteristic. The marsupial “howls”, emitting terrifying noises that frightened the first settlers of the continent. The conquerors could only define these demonic sounds and give the sighted mammal the name “devil”.

Puppies Are the Size of a Grain of Rice at Birth

Tasmanian devil puppies are really tiny at birth. Their dimensions are those of a grain of rice. Each female gives birth to 20 to 40 pups, but only a fraction of them survive in the mother’s pouch because she can only nurse 4 pups at a time.

Is the Largest Carnivorous Marsupial on the Planet

The Tasmanian devil is a carnivore with a capital C. It feeds on any prey, from snakes to baby kangaroos. For more than 80 years, it has held the title of the largest carnivorous marsupial on the planet, having ousted the Thylacine or Tasmanian Tiger, its distant relative.

Stores Fat in Its Tail

Of everything the Tasmanian devil eats, it never leaves anything. It can eat up to 40% of its weight in a day, storing the fat of its prey in its tail. A particularly large tail is therefore a sign of excellent health.

Glows in the Dark

Like the platypus, wombat and other animal species, the Tasmanian devil is affected by the phenomenon of biofluorescence, emitting ultraviolet rays in the form of visible blue light.

The Tasmanian devil’s teeth are its most deadly weapon. They manage to crush the bones of its prey in order to feed on them. Teeth grow throughout its life and it is precisely by hunting that this marsupial manages to file them down, but at the same time to have them perfectly efficient.

Is a Great Swimmer and Tree Climber

The Tasmanian devil skillfully climbs trees on the island, especially when it is small. Not only is it an experienced climber, but it is also a great swimmer. A Tasmanian devil can swim for a whole hour at 24 km per hour.

Yawns When It Feels Threatened

The Tasmanian devil is a rather shy animal towards humans. However, this cute marsupial has the habit of showing its teeth and yawning when confronted with its fellow creatures or other living beings.

Is Exposed to the Risk of Tumors

Two of the causes of the decline in Tasmanian devil populations are facial tumors that affect the species closely. These are transmissible by bite and appear on both the face and mouth of affected specimens, preventing them from feeding.

Is in Danger of Extinction

Since 2008, the Tasmanian devil has been included in the International Union for Conservation of Nature red list as an endangered species. In addition to tumors, which became widespread in the 1990s, investments are a common cause of death for these marsupials. Often, the Tasmanian Devil will pounce on the carcasses of previously crushed animals, becoming a roadkill in turn.

There you are! Have you ever since one Tasmanian Devil? If not what other marsupial have you seen? Let us know your experience in the comments below.