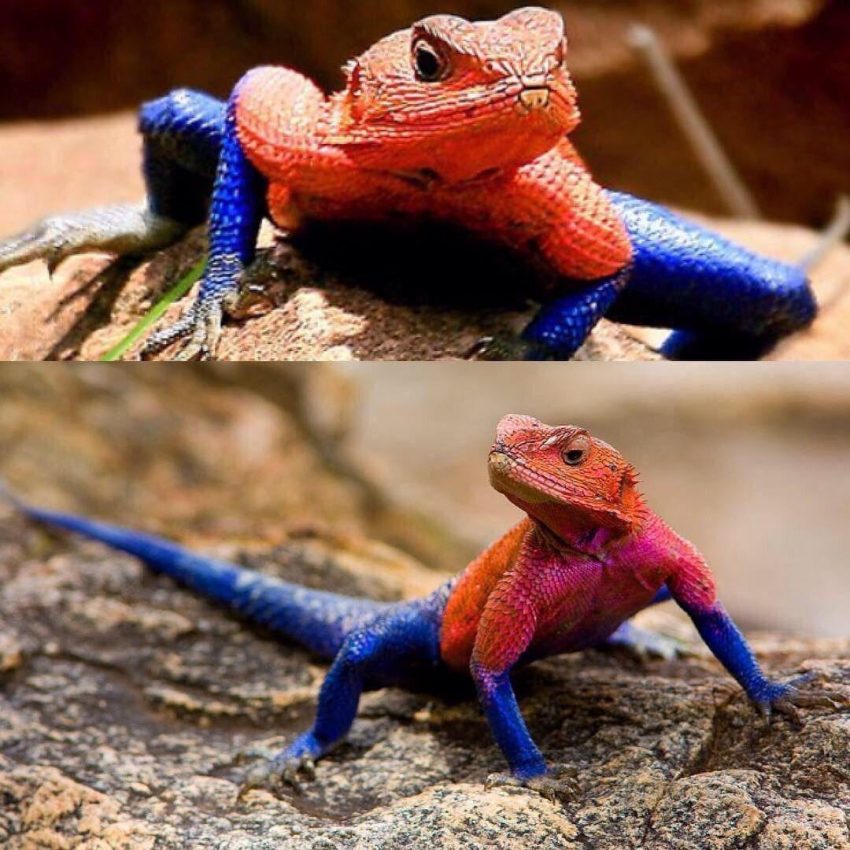 Reptiles are not the most loved or admired animal species by people. Generally, their individuals evoke fear or disgust. But let’s be honest, many reptiles have amazing features and many of them can even be cute, colorful and give us a sense of connection to the dinosaur era. Some of them, however, stand out for their strangeness. Check them out below.

Here’s a little lizard that many superhero fans would love to own! The agamamwanzae agama lizard is one of the most spectacular reptiles on the planet and develops vivid coloring on its face and body during the hottest hours of the day. The males’ fight for territory can also cause a change in coloration.

Most intriguingly, the contrast between a red face and a bright blue body has led this animal to become something of a celebrity, calling itself the “Spiderman lizard.” These animals can grow up to 38 centimeters long and feed on a wide variety of insects.

The Galapagos marine iguana is a highly adapted reptile that feeds on algae. These creatures can be seen lurking on the rocks between the beaches of remote islands. The coloration of marine iguanas includes a wide range of browns, pinks and greens that stand out among the rocks.

These reptiles are the only marine lizards on the planet and represent one of the world’s most bizarre adaptations. Marine iguanas swim like crocodiles and use their sharp teeth to tear strands of algae from rocks. Charles Darwin was not a fan of these animals aesthetically, describing them as “hideous beasts.”

Animal adaptation involves specific feeding methods that require the development of a new approach over time. Crocodiles and alligators use brute force and a large crushing bite, but one species has developed a more refined approach.

Measuring up to 20 feet long, the Gavial, also known as Gharial, is a huge, imposing crocodile, but it poses little threat to humans. With a narrow, protruding snout, this creature feeds almost exclusively on fish rather than larger prey like other crocodiles.

The problem is that, unfortunately, the species is now endangered, occupying only two percent of its former range across the Indian subcontinent, where most specimens live.

Rhinoceros vipers are among the most feared predators on the planet. These venomous snakes feed on small prey, but many human interactions have had dangerous, even deadly consequences.

The rhinoceros viper is no different in terms of venom, but it is distinguished by its incredible range of colors, which has earned it recognition as one of the world’s most beautiful snakes and also provides a form of camouflage. The horns that protrude from the end of its “snout” make it even more exotic.

Measuring about a meter long, these reptiles are slow and much more “obese” than common snakes, which gives them a heavy and imposing appearance. But despite all this strange beauty, it is dangerous and its bite can be fatal.

The rubber snake has the ability to control its temperature, which is unusual among reptiles. It is considered a small snake, reaching a maximum of 45 centimeters in length, but its lifespan is long, reaching up to 70 years.

Nicknamed the “two-headed snake”, the rubber snake has an enlarged tail that can be used as a decoy to defend itself. The tail may also show scars from rat bites, as it is used to protect itself from adult rodents, as the snake attacks nests where young mice are located.

The dragon snake is a rare and totally nocturnal species that feeds almost exclusively on frogs. The creature is easily distinguished by its bizarre scales that give it a studded appearance, resembling, in fact, a mythological dragon.

The snake is considered a more primitive species, as it has this unique set of scales that includes pierced and protruding parts along the snake’s body. The dragon snake is native to Thailand, Burma and Indonesia, and is beginning to attract the attention of the scientific community because of its strange and fascinating appearance.

There you go! You now know 6 of the weirdest reptiles on the planet. What’s the strangest living thing you’ve ever seen and where? Let us know in the comments below.