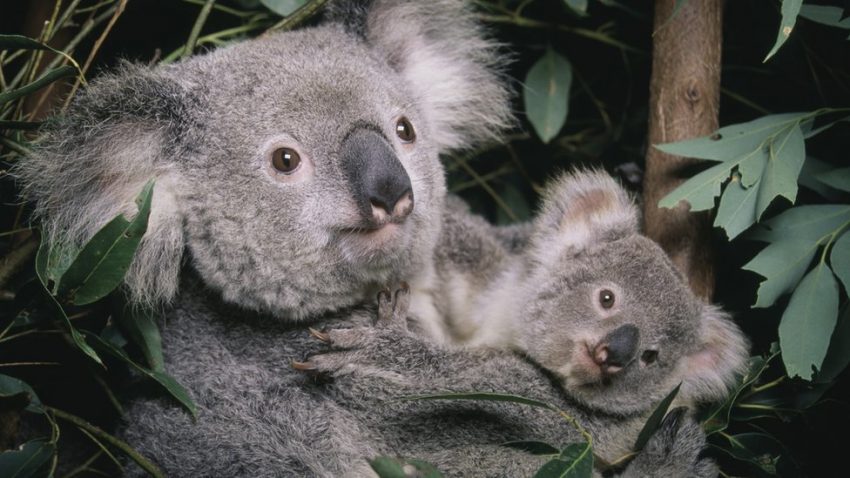 Several months before the fire season began in Australia, earlier than usual, there was already talk of a “functional extinction” of koalas. This term refers to the fact that a particular species has reduced its population.

It no longer plays an important role in the ecosystem.

Is the Koala Really in Danger of Extinction?

The koala is a very important part of the Australian ecosystem. For millions of years, it has been the key to the health of eucalyptus forests. They eat the upper leaves of these trees and their droppings help to recycle nutrients into the soil. Therefore, if the koala population declines and stops performing these functions in its ecosystem, the ecosystem suffers.

For this reason, the Australian Koala Foundation (AKF) has declared the koala “functionally extinct.” In a statement, the AKF said there would be no more than 80,000 koalas in the country. Does this figure put the koala in danger of extinction? It should be kept in mind that this is a species that is generally difficult to quantify.

With the fires in Australia, the previous information was added to the images where koalas could be seen helpless in front of the flames when rescued.

Koalas are particularly vulnerable to fires because their only escape is to climb to the top of eucalyptus trees, the trees they live in. An ineffective form of defense given the severity of the fires that have ravaged Australia.

But in reality, eucalyptus trees are well adapted to fire. They germinate and regrow shortly after being hit by fire. Also, because of its height, during a normal fire, the top of the tree is usually left intact, so koalas can take refuge there. The problem is that this fire season, the flames have grown much larger. And they have grown so much longer over time that they have finally reached the tops of the eucalyptus trees.

From this situation, information that was not entirely correct began to be disseminated in the media and on social networks.

Yes, there seems to be unanimous agreement that koalas are a species vulnerable to extinction. That’s the category before being in danger of extinction. We also know that between 350 and 1,000 dead koalas were found in the fires.

Chris Johnson, professor of wildlife conservation at the University of Tasmania, said, “You won’t see koalas going extinct quickly. While it’s true that the koala population will continue to decline for interrelated reasons, the time is not right when it will do so for a single reason like the fires.”

For some experts, exaggeration about koala extinction may do more harm than good, as it could reduce support and efforts for their conservation. In other words, when faced with something irredeemable, we might throw in the towel, when there is still much to be done to help the species.

Are Koalas in Imminent Danger of Extinction?

The International Union for Conservation of Nature’s Red List, which is the authority on the conservation status of species worldwide, assures that the koala population is declining and is therefore vulnerable. But it is not endangered.

In 2016, experts estimated a population of about 330,000 koalas, which represented an average population decline of 24% from the previous three generations.

Since then, and although it is a population that for various reasons, including fires, has decreased, there are still estimated to be thousands of koalas. But, as we have already mentioned, it is very difficult to specify a number. This is because this is a species that is found in different parts of Australia over a very large area.

What is clear is that it is a species vulnerable to extinction, although it has not yet moved to the next phase, the one that is really worrying and dangerous for the survival of the species.

Here you are! You now know the truth about Koalas and how vulnerable they are. What are your thoughts on this matter? Share everything with us in the comments below!