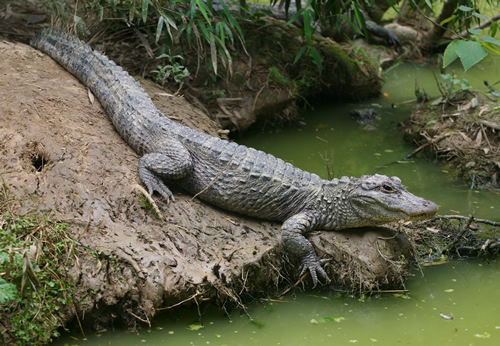 When we think of crocodiles and alligators, the first thing that comes to mind is a giant-sized reptile. However, the Chinese crocodile has broken that tradition and reduced it to almost the same size as the dwarf caiman (a small crocodile in the alligator family). Nevertheless, it is still a ferocious animal that can do a lot of damage with its jaws.

Its scientific name is Alligator sinensis, and it belongs to the Alligator family. It is not a crocodile in the strict sense of the word, but it is a close relative of these reptiles. Let’s learn more about this small yet dangerous animal.

What is a Chinese Alligator?

The Chinese alligator is a type of theropod that lives in China’s lower reaches of the Yangtze River. However, it is said that the population may have been much larger in the past.

The preferred habitat of these organisms is freshwater areas in subtropical climates. Therefore, places like swamps, lakes, streams, ponds, and wetlands are essential for these reptiles.

This alligator is similar to its American relative, the alligator, in that it has a U-shaped snout. Its hard skin is like armor, and its long tail allows it to move through the water. It also has powerful claws on each of its four limbs, and its teeth fit so tightly into its jaws that they are unnoticeable to the naked eye.

However, the most distinctive feature is its size, with an average length of about 1.5 meters. In contrast, dwarf caimans can be 1.2-1.6 meters long, and yakare caimans can be 2-3 meters long. This classifies them as at least one of the smallest crocodiles in the group.

As mentioned earlier, these reptiles have tough skin, as they are covered with bony skin. These are bony scales that are quite tough, and it acts as a protective coating that covers the entire body including the eyelids. Also, at the tip of the nose, the snout sticks out a little. This is a similar feature to the alligator but different from the other alligators.

The body of this predator is dark in color, ranging from yellow to gray. In addition, several black spots are often seen on the lower jaw, and it also has several yellow bands along the body.

Reptiles are ectothermic organisms, which means that they are highly dependent on the temperature of their environment. Therefore, when it gets cold, they go into mild hibernation and drastically reduce their activity level. This mechanism is similar to hibernation, allowing them to “sleep” in late fall and become active again in the spring.

Because Chinese crocodiles spend most of their lives in the water, they need to refuge near banks. For this reason, they dig burrows that are nearly a meter deep, where they can rest freely.

In general, when the weather is good, and they can go outside for activities, they spend most of their time in the sun to regulate their body temperature. This allows them to hunt at night and benefit throughout the day metabolically.

What Does the Chinese Alligator Eat?

This reptile is a carnivore and usually preys on animals in its environment. They feed on fish, snails, mussels, and amphibians, which they capture underwater. However, they have also been spotted eating poultry and small mammals.

The breeding season takes place annually in June, close to the rainy season. During this time, both sexes begin to vocalize to communicate and find a mate.

These creatures are monogamous. This means that a male can fertilize more than one female, but a female only has one mate per year.

Once the pair has mated, the female is responsible for assembling the nest and chooses a location surrounded by plants and mud near the water. When the young hatch in September, the mother takes them from the nest and places them in the water.

Did you know about the Chinese alligator? Share your thoughts with us in the comments below!