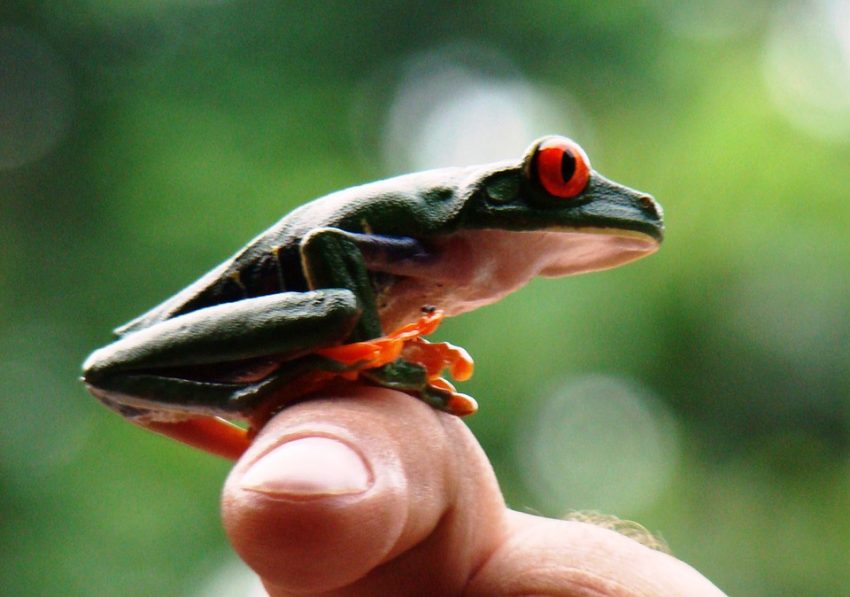 Because of its eyes and beautiful skin color, the red-eyed tree frog is considered one of the most beautiful animals on earth. Want to know more about this species? Read on!

The red-eyed frog (Agalychnis callidryas) is a small amphibian that has gained popularity over the years due to its beautiful eyes. This special feature has been immortalized in many pictures and advertisements on the Internet and the media.

As a result, many people are choosing to keep these species as pets. However, breeding them in captivity is complicated due to their unique needs. These include the fact that they are nocturnal and the environmental conditions of their habitat. Here’s some of the most pertinent information about this curious amphibian:

Habitat of the Red-Eyed Tree Frog

The red-eyed tree frog is a member of the Hilgidae family and is found in lowland rainforests and rivers. It is distributed in the rainforests from eastern Honduras to Northeastern Colombia. They have also been seen swimming in rivers and streams. It attaches itself to tree branches, leaves, and trunks by sucking on them. This amphibian prefers a temperature of 25-30°C during the day, 18-25°C at night, and 80-100% relative humidity.

As its name suggests, the red-eyed frog is characterized by the bright green of its skin and the red of its eyes. On the other hand, its forelegs and hind legs are orange, while its ventral side is distinguished by its bright blue coloration.

This species exhibits a very distinct sexual dimorphism. Males are considerably smaller than females. Males reach 56 mm and females 71 mm. Also, as already mentioned, these frogs have large soles with suction cups on the toes, which allow them to move around and attach themselves to the leaves of their habitat.

The Behavior of the Red-Eyed Frog

This species is nocturnal and lives in trees, and they find shelter in tall trees and underbrush to protect themselves from significant predators such as snakes, birds, and bats. As with other frog species, the bright color of its skin alarms those who would try to attack it. However, it should be noted that their skin contains a small amount of toxins.

What Does the Red-Eyed Frog Eat?

This frog’s diet is carnivorous, and it relies on flies, grasshoppers, moths, and crickets. Because of its skin color, it can pass unnoticed through the leaves of trees and wait for insects and small animals to feed on it.
This species will even eat other tiny frogs as long as they fit in its mouth. Young frogs, on the other hand, will eat mealworms and crickets. In captivity, they may eat mealworms, wax moss, and small specimens of various species of orthoptera.

The musical mating ritual of the red-eyed frog begins with a loud croak from the male, and the neighboring males join in. All males begin to chirp and jump from leaf to leaf to establish a territory and attract females. Interestingly, males of this species have been observed to vibrate when their chirping reaches its peak.

After calling out to the female, the two males seem to attack each other to show their strength. Finally, the female slowly descends from the tree top without being seen. As soon as the male spots her, he will run and get to her first.

Red-eyed frogs usually lay their eggs in plants that overhang the water’s edge, and the tadpoles slip through the leaves and fall into the water when they hatch. The male welcomes the female and engages her in a mating embrace called amplexus. The pair continues in this state for many days until the female lays her eggs. At that point, she releases the eggs on a leaf, and the male immediately fertilizes them outside.

Have you ever come across a red-eyed tree frog?