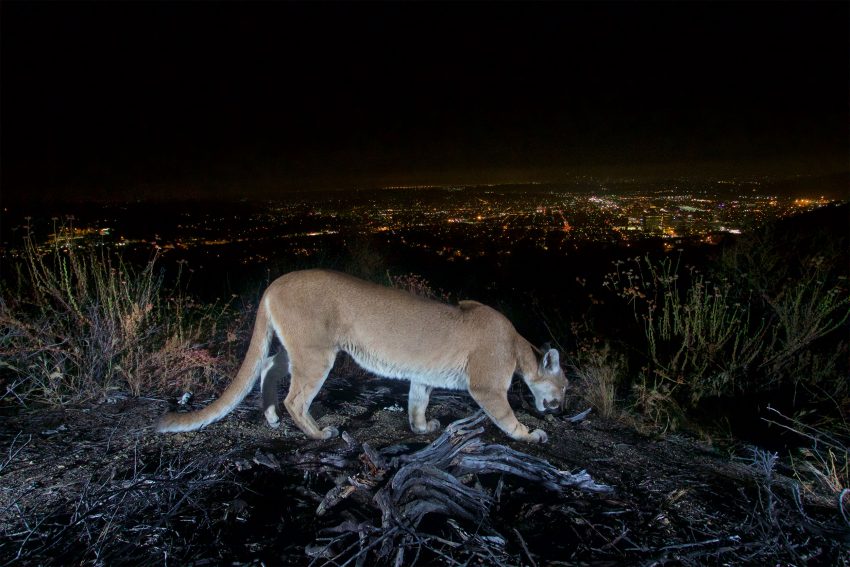 According to a new study published in Ecological Solutions and Evidence, as people sheltered in place during the initial stage of the COVID-19 pandemic in Spring 2020, mountain lions in the Santa Monica Mountains and surrounding areas in Greater Los Angeles used smaller areas and moved shorter distances.

Speculation from the media and public helped fuel the perception that wildlife expanded their home ranges and were ‘reclaiming’ cities as people sheltered-in-place. Mountain lions, however, did the opposite of that.

Biologists from the University of Nebraska, the National Park Service (NPS) at Santa Monica Mountains National Recreation Area and Virginia Tech conducted the study by investigating the behavior and movement of 12 GPS-collared mountain lions (eight females, four males) occupying parklands and surrounding areas in Greater LA from January to June 2020. They also evaluated whether mountain lions crossed freeways and other major roads with reduced traffic during the COVID-19 shutdown.

“Mountain lions are elusive and remarkably good at staying out of sight of humans – even in LA,” said John Benson, an assistant professor of wildlife ecology at the University of Nebraska-Lincoln and the study’s lead author. “These new findings show that, at the height of the stay-at-home order, mountain lions were able to move more efficiently when there was less need to avoid humans. During this period, they were actually closer to trails and development – places that are usually dominated by humans.”

Consistent with previous findings from the same population, it is important to note that mountain lions rarely entered urban areas (less than 2% of the time at night and never during the day). On average, mountain lions monitored via their GPS radio tracking collars were located almost a kilometer away from the nearest development.

“Ecological theory predicts that animals should use the smallest areas within which they can acquire resources, such as food, that they need to survive and reproduce,” Benson said. “So it is actually not surprising that when there were fewer humans out and about, resident mountain lions moved less and used smaller areas as they relaxed their usual avoidance of places frequented by people – like trails in normally busy city parks.”

Benson noted that scientists know animal behavior is strongly influenced by humans but it remains unclear to what degree animals respond to human infrastructure, such as roads and buildings, or directly to people themselves.

Previous research has shown that mountain lions in the greater LA area are isolated and inbred because freeways and urbanization act as barriers to the movement of animals. However, despite substantially reduced traffic volume on LA area roadways during Spring 2020, the new study found no evidence that mountain lions crossed roads more frequently.

“The fact is that the roads, especially big roads like freeways, in Southern California are major barriers to movement for all kinds of wildlife, including mountain lions, because of their size and the amount of traffic,” said Seth Riley, an NPS biologist who has been studying mountain lions in the Santa Monica Mountains for 19 years. “The traffic was reduced certainly, but there was still plenty of use occurring, and the barrier effect doesn’t just disappear.”

This new study has provided a rare glimpse into the behavior of the largest wild cat in the United States in its second largest city during an unprecedented reduction in human activity. The decrease in area used and shorter distances travelled by mountain lions within their home ranges during COVID-related reductions in human activity imply that avoiding humans during periods of ‘normal’ human behavior results in inefficient movement for mountain lions. Such inefficiency by top predators may have far-reaching implications for wildlife ecology and conservation.

Mountain lions are threatened with local extinction in the Santa Monica Mountains due to their isolation from nearby populations. Thus, expending additional energy while navigating human disturbance could add extra stress to a population threatened by both genetic and demographic factors in the human-dominated landscape of LA.