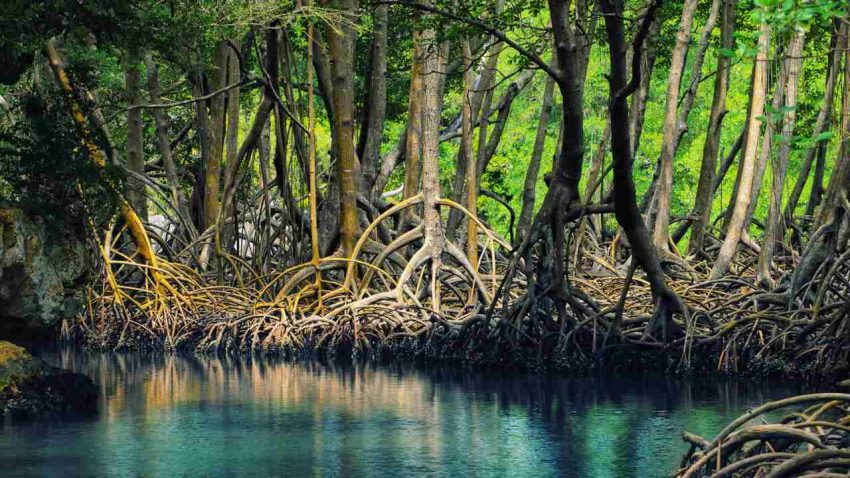 Mangroves protect coasts against extreme weather. While they may protect shorelines from cyclones, how does a hit from a hurricane affect the mangroves? Michael Osland and Ken Krauss have surveyed the literature in a new paper, Tropical cyclones and the organization of mangrove forests: a review.

“Land managers in the National Park Service and program coordinators in the USGS asked us if such a review existed after Hurricanes Irma and Maria ravaged the US Virgin Islands, Puerto Rico, and Florida,” said Ken Krauss. “We realized that such a review did not exist but the fear of managing mangroves that are hit by repetitive cyclones has prompted folks to wonder what can be expected in their mangroves after such storms. What is normal? We attempted to answer that.”

Mangrove regeneration is a significant challenge for the plant. Firstly, the seedlings have to survive a cyclone strike that rips down older trees. Surge and high tides can buffer and protect seedlings and saplings from wind effects during tropical cyclones. When Cyclone Tracy affected the mangrove forests around Darwin, Australia, in 1974, forests were on a rising tide, leaving most saplings and small trees covered in water and unaffected by winds suggested that flooding of the regeneration pool contributed significantly to a near-complete recovery of the mangrove forest within ten years of Cyclone Tracy.

Once the cyclone passes, the seedlings are exposed. This change dramatically increases the light levels for saplings to grow. However, they are still in a saline environment, meaning using water for photosynthesis is not a simple matter. As well as harbouring seedlings in the hit location, mangroves can release propagules, plants ready to grow, when a cyclone hits. These propagules are scattered and can survive for months at a time. If they arrive in a suitable location, they can settle and regenerate a new mangrove forest. The timing of propagule production coincides with some of the hurricane season in the Gulf of Mexico. It is tempting to ask if mangroves are using cyclones as a reproduction opportunity but Krauss is skeptical.

Some have suggested that the reproductive delivery of some species, including Rhizophora mangle, have evolved to peak during tropical cyclone season in the Neotropics. The idea being that these storm winds assist longer distance dispersal, surge (especially dispersal into interior marsh areas) and current anomalies. It isn’t easy to visualize the fitness benefits gained by such interaction and if they do exist, they still need to be sorted. All of this is confounded by temperature. Maximum average temperatures in the tropics (and sub-tropics) that would facilitate reproduction coincide with the best conditions for tropical cyclone intensification. From reading papers during the development of this review, several authors have suggested some creative benefits of co-evolution, but further testing is required to make such links.

It’s not just light levels that can change following a cyclone. The soil that a tree is in can change dramatically too. Feher and colleagues found an immediate gain in soil surface elevation from storm-deposited sediments along the Shark and Lostmans rivers immediately following Hurricane Wilma but that gain was partially negated over time as those sediments compacted in the years following the sediment pulse. Hurricane Irma later added more sediments, lifting the elevation further.

It’s not just land that can rise, so can the sea. In order to survive rising seas, mangrove forests often need to catch or deposit material to rise themselves. Sea‐level rise is a special concern for coastal land managers, especially as many mangrove ecosystems cannot migrate inland because of artificial barriers, such as sea walls and dikes.

The study of mangrove response to cyclones relies on a bit of luck and a lot of survey work. Knowing exactly where a cyclone will land in advance is difficult, even just a few days out. So ecologists looking at shoreline damage have to move in afterwards.

Let us know in the comment section if we missed anything regarding the recovery of mangrove forests following a cyclone.