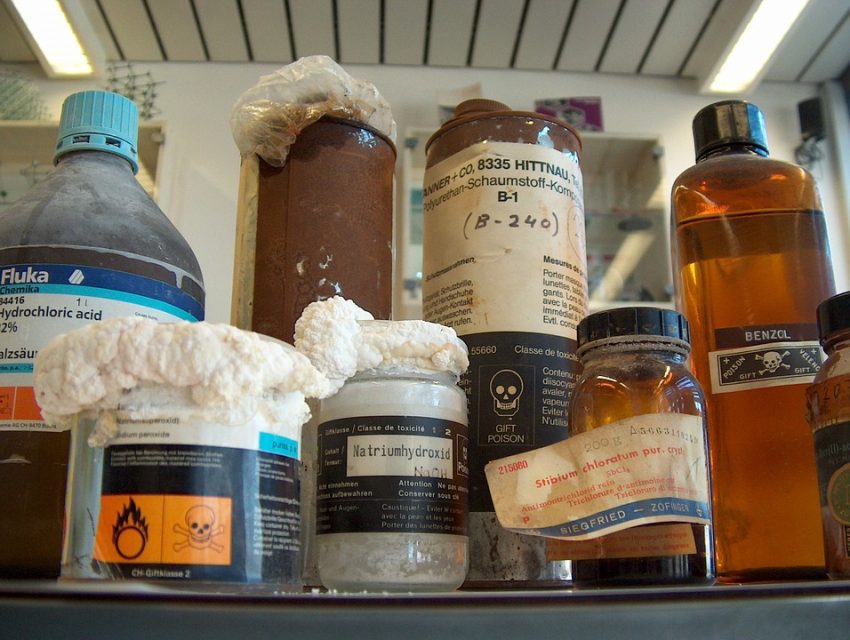 Hazardous waste materials are waste that are considered as polluting, even toxic, and which may represent a risk to human health and the environment. Toxic waste takes many forms, such as used or expired objects, substances, harmful releases to soil, air and water, various scraps of dangerous products. More specifically, they often come in forms of batteries, paints, varnishes, cleaning products, pesticides etc. Moreover, they can prove to be even more dangerous when they are mixed with other waste in garbage cans and not to mention that they can create risks for the people in charge of their handling and can damage waste treatment channels. Due to their toxicity, these waste materials require appropriate treatment in accordance with the regulations in force.

Human beings can be exposed to harmful chemicals in a number of ways, including through the food we eat, the water we drink, the air we breathe, and our work environments. For each sector, there are regulatory tools to mitigate this exposure, and workers’ safety can be ensured through the application of appropriate rules. However, in many developing countries, these regulations are still lacking, as are the means to enforce them.

What Is the Impact of Harmful Chemicals on Public Health?

The properties of chemicals vary widely. Many of these substances are neither dangerous nor persistent, but some may even be fatal on contact. Others may persist in the environment, accumulate in the food chain, travel great distances from their release site and can be harmful to human health.

The global rate attributable to environmental exposure and improper management of certain dangerous chemicals represents at least 4.9 million deaths per year, with 1.2 million deaths from industrial and agricultural chemicals. For example, heavy metals, pesticides, solvents, paints, detergents, kerosene, carbon monoxide and drugs cause unintentional poisonings, which are estimated to cause 193,000 deaths per year, with the majority of them being cases which could have been avoided.

Over a third of ischemic heart disease, the leading cause of death and disability worldwide, and approximately 42% of strokes, the second leading killer worldwide, could be prevented by reducing or eliminating exposure to harmful chemicals. For example, passive exposure to tobacco smoke and ambient air pollution contribute 35% to acute lower and upper respiratory tract infections, including pneumonia, bronchitis, otitis, and bronchiolitis, the leading cause of mortality in children. These harmful exposures are also linked to low birth weight and death at birth.

Where to Dispose of Harmful Chemicals?

Some examples of special collections:

-Drain oils: they can be collected free of charge by certain garage owners and car distributors.

-Expired, unused medicines and their packaging as well as old mercury thermometers: they must be brought back to pharmacists.

-The waste produced by patients in self-treatment or users of self-tests: they should especially not be thrown in recycling. There should be organizations that help collect these safely. For instance, some companies provide pharmacists with containers where items such as needles, syringes, or other sharp objects used for healthcare can be disposed of.

Regarding asbestos waste: it is crucial to find out from your community for this very specific waste.

How Can We Reduce Our Exposure to Harmful Substances?

The World Health Organization (WHO) estimates that 71% of unintentional poisonings could be prevented through better chemical safety. Actions that can be taken vary from sector to sector, but all are focused on better regulations. Some of them include:

Toxic waste must be disposed of properly. If this process is done deliberately, it can endanger many individuals to the presence of unknown hazardous materials. This is why only specially trained people with appropriate protective equipment and tools should intervene. Additionally, hiring professionals will make your life easier and provide a wealth of advantages. If you’re looking for an integrated waste management solution for hazardous chemicals, contact Action Hazmat Companies. From oily waste and sludge to paints, cyanide waste and acids, they have the expertise and resources to meet the waste management needs of a wide range of industries!