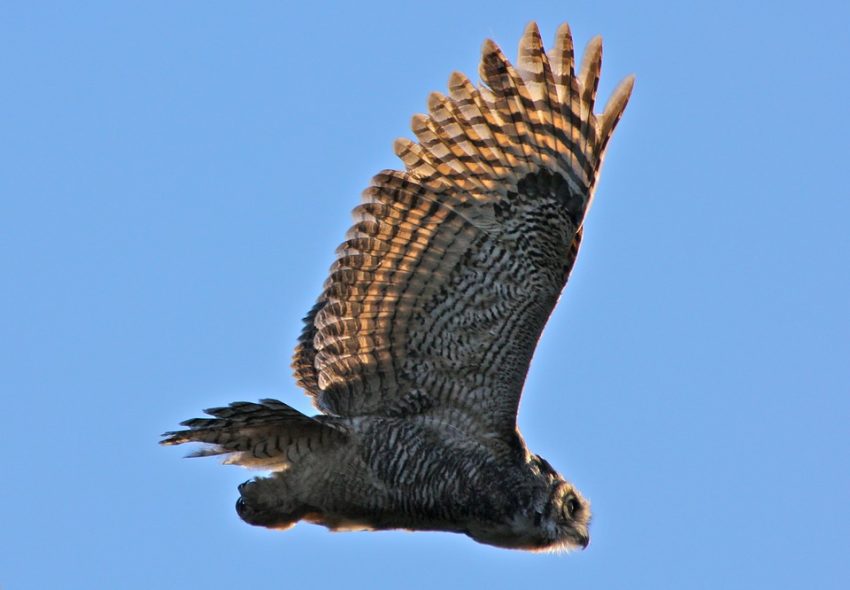 The great horned owl is the most common owl of the Americas. The large bird has a deep hooting voice, long ear-like tufts of feathers, and big yellow eyes that can be intimidating when they stare. Here are some interesting facts about this magnificent creature.

Despite its name, the great horned owl does not have any horns. It is named after the tufts of feathers known as plumicorns, which resemble horns on both sides of its head.

Great horned owls are birds of prey, they feed on animal flesh and are identified by their hooked bill and sharply curved talons. They are primarily nocturnal, that is they mostly hunt at night but can sometimes hunt during daytime in winter. These birds have the most diverse diet of the North American raptors. They eat squirrels, hares, several birds including grouse, pigeons, ducks, geese and are also of one of the rare birds to have a skunk as their meal. Sometimes they also feed on large insects, fish, and scavenge road-killed animals. When grabbed by the owl’s wide, curved talons, the prey is instantly killed. Great horned owls also have an unbelievable digestive system. They can swallow their whole prey and later regurgitate pellets of indigestible materials like fur, bones and other unwanted elements of their diet.

Although they have huge eyes that make up 3% of their whole body, great horned owls cannot roll their eyes. Just like other owls, they do not have eyeballs. Their eyes are shaped like tubes and are firmly held in place by bones known as sclerotic rings. Hence, they can only look straight ahead. However, they can turn their heads to a maximum of 270 degrees without damaging any blood vessels or tearing tendons.

4. Female Great Horned Owls Are Larger Than Male Ones

Both sexes of great horned owls are similar in appearance. However, male ones are smaller than female ones averaging about 2 kg to the male’s 1 to 1.5 kg. The females’ call is also higher and rises in pitch compared to male ones. When a pair of great horned owls call each other, the female generally hoots first, and the male replies at a lower pitch.

What other interesting facts you know about great horned owls? Let us know in the comments below!

1 thought on “4 Interesting Facts About the Great Horned Owl”